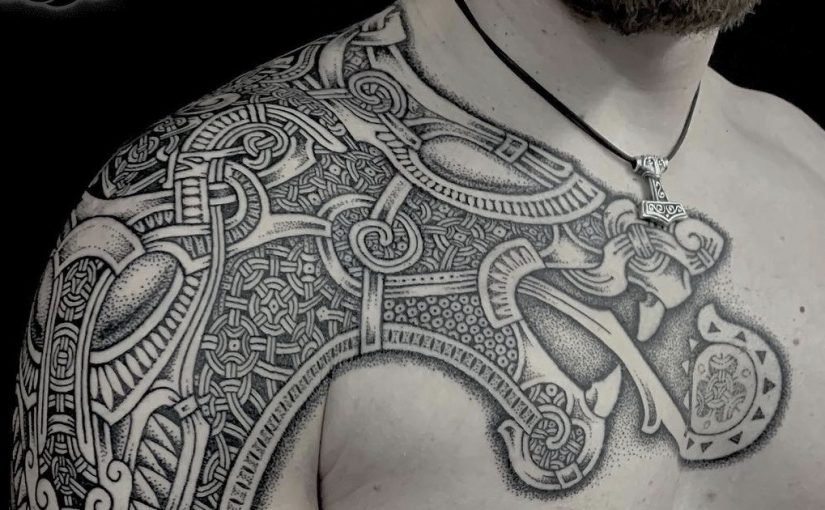 On his shoulder the son of the trickster lies, and on his chest and back his grandsons chase their prey the sun and moon. The wolves all play their parts in the end of the worlds and the gods. Looped in the mouth of Odins adversary is his brother, the world snake. It’s head is just visible on Thomas’s forearm. Serpents writhe in the body of Thor’s bain. Embedded within the design are other creatures and story references, Fafnir heart among them.

In this description of the design I’ve used some examples of poetic character references common in early Icelandic poetry. I am by no means an expert on the art and the poetry was written after the Viking age. However, I thought it would be fun to reference the characters present in this way for a change. The language they would have used to tell these stories would have been so much richer than modern English, German and Scandinavian for that matter (although modern Icelandic is still pretty crazy as it’s not changed as dramatically since the Viking age), especially with their used of kennings. The wording in the stories would have almost certainly had many secondary meanings. They will have certainly been a lot more elaborate and confusing than our modern understandings of the tales. I believe even in the Viking age there were a lot of loose ends and mysteries to the tales to force people to try and work out the puzzles and meanings of the stories and beliefs. This had to have been the case with the oral tradition that would have existed at the time.

I included many references in its style and execution to the Viking arts Borre, Mammen and Urnes.. but it is ultimately New Nordic. And as always I invented a specific rule pattern that I used throughout the design that’s individual to Thomas.
It was lovely to get to work on this piece, and wonderful to get to sink my teeth into something with a lot of repetitive patterns again. Looking forward to finishing it soon, and I’ll do my best to see you next in Germany Thomas