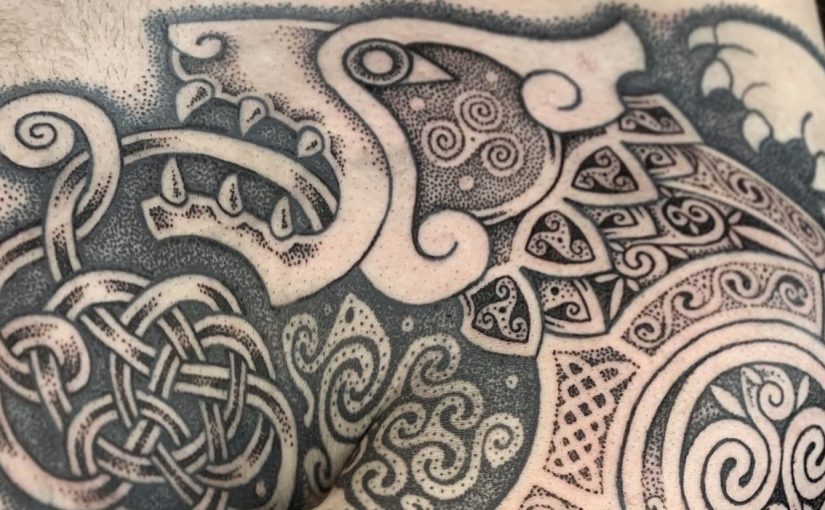 Work in progress. A few months back I made a start on this Insular Celtic hound with help shading from @dyrs_hjarta_art.

The details and patterns in the design for Peter are inspired by the Insular style. This style was around from the seventh century but started to dwindle in the eleventh century. When I mention to people that this style was famously practised by British monks, I see that they sort of switch off. Perhaps because it’s connected to Christianity it doesn’t appear as cool as other art from the time. However, it is worthing considering that its main artistic influence was pagan Celtic art, as well as Germanic and Roman art. Also, the Christians populating Britain and Ireland would be very different from what you may think. Most of the tribes (Irish, Welsh, Saxon & Viking) would have been sort of Christian, but also held onto their pagan warrior cultures. The Insular art shows this, as well as remnants of their older religious beliefs and superstitions.

Kings, Queens, Warlords, Warriors, and freemen would have been decked out in broaches, weapons and jewellery of this style. Perhaps one of the biggest missing pieces of this puzzle is the embroidery on clothing and tapestries of the day. This was the style was supposedly most heavenly practised and innovated. I’ve heard that embroideresses in Ireland in the 7th century could be as important as queens. These women would have been the real trendsetters of the day along with the metalworkers and stone carvers, not just the monks and their extremely slow output of gospels.

Anyway, I think this style is fucking cool and I want to do more of it as well as early Celtic work. Email me if you’re interested in having some done, I don’t mind if your ideas are big or small. If so, you won’t have to wait too long to book in. I want to balance out what we do in shop from it currently being mostly Nordic.