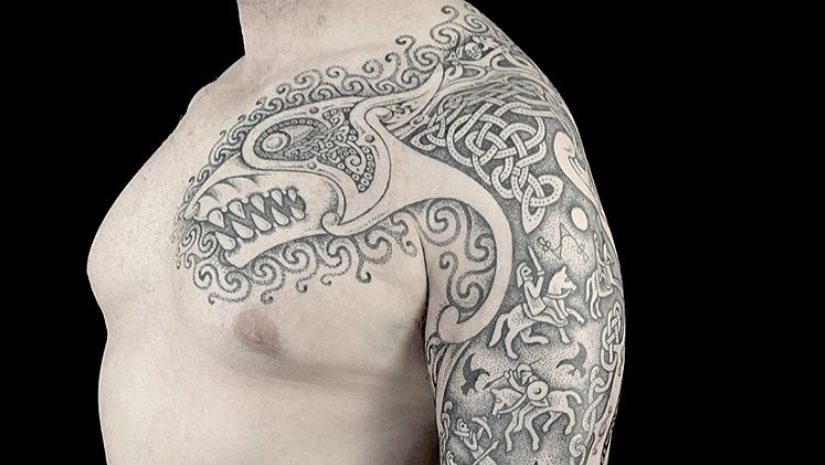 Kelvins #aberlemnostone2 sleeve is finally done! His tattoo is a dedication to the picture stone that can be found in the Aberlemno kirkyard. This depicts the battle between the Picts and the Northumbrian Saxons. Click on the hashtag above to see the original stone.

One side of the stone shows the Picts winning a decisive battle against the Northumbrian Angles on the 20th of May, 685. This battle changed the course of Scottish history and is also Kelvins Birthday! It pushed the border on what is now Scotland back down to Hadrians wall after the Angles and Saxons had slowly taken land as far up as Edinburgh. At the top you can see the Pictish cavalry routing the Angles and their footmen hold them off below. Lastly, you can see the final push that destroys the Angles.

The Picts can all be recognised by their long hair, while the Angles all have nasal helmets. This includes the dead warrior getting his eyes pecked out which is said to be the leader of the Angles. Although this is based on the original stone, I’ve twisted the scene and patterns to work on Kelvins arm. His arm is not a 7ft by 5ft stone. 😂 We also amplified certain aspects of the image like the wolf heads framing the top of the stone.

Other than the forearm most of this tattoo is well healed and it is nice to post an example of my work ‘finished’ for a change.