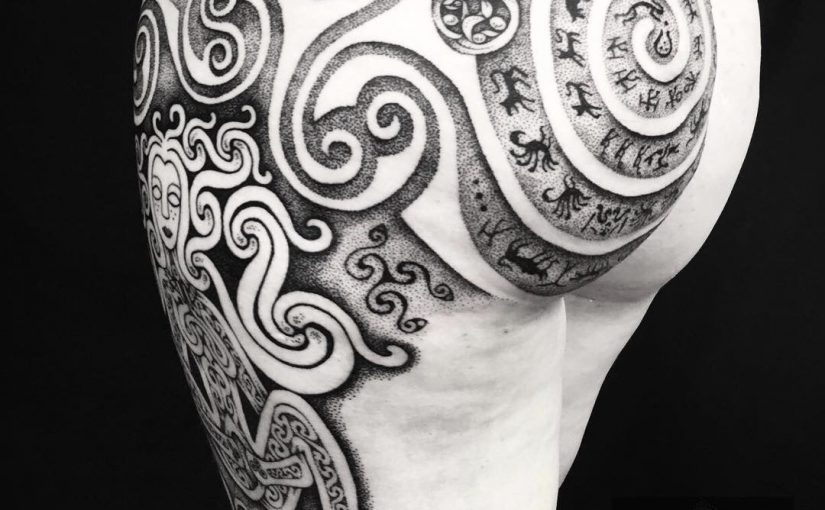 I am lucky enough to have worked with some of my clients on a number of visits. It is an honour to be trusted with some of the huge projects I have been involved in and am always happy to work with different inspirations. Gina comes from the heartland of La Tene and Hallstadt art so I was particularly excited to work on this piece.

Sheela Na Gig. This is the start of a big project that Gina has asked me to tattoo for her. Its focus will be the Celtic gods and goddesses, myths and the ancient European art styles, mainly La Tène. The Sheela Na Gig that you can see in the picture is also the inspiration behind the “Snake Witch” painting. The print of this is available in both colour and black and white through Northern Fire.

When it comes to figures in Celtic mythology there are always a lot of gaps in knowledge and understanding. Christianity did a very good job of incorporating and later eliminating pagan practices and beliefs from our ancestors in Europe. For example, Sheela Na Gig was introduced into the grotesques in architecture in primarily Anglo-Norman Christian churches and castles. Maybe she was invented in the 11th century to place above doors to spew life into the portal to ward off death. Maybe she’s the head goddess of an ancient religion that couldn’t be stamped out of the beliefs of the stonemasons that carved her.. we will never truly know. But to Sean, as crude as Sheela The Busty is, she’s a beautiful link to our pagan past and strange primal beliefs and superstitions.

Within the main spiral in the design, there are references to some of the strange creatures and stories that inhabited the imagination of our ancestors. Some of them very recognisable to us today, and some of them…not so much. We used the Gundestrup Cauldron as a reference for many of these creatures and scenes. Lions featured heavily in many of the old stories as the basis of a powerful mystical beast. Sailors would surely have told stories of these creatures, and some may have even seen them with their own eyes. At this time, people spoke of lions, elephants, griffins, dragons, giraffes, rhinos, sea monsters, and whales etc. Therefore who could have known which ones were real and which ones pure fantasy? The mystery and uncertainty would have intrigued them as much as the uncertainty of their lives and beliefs intrigues us now.

Gina’s hand is still very swollen in this final picture… but when you get 50 lines around your arm over a few days, it’s to be expected.

This piece is inspired by early Iron Age Celtic art from across Europe. I know it’s not my usual thing, but contrary to the subject matter I usually deal with, I’m deeply fascinated with all European art. From the earliest zigzag patterns on horse jaws to cave paintings that have so far been discovered. The piece this was inspired by was thought to be a sort of calendar from the early Hallstatt period. Whether it was or not, that’s the direction we chose to take our piece in. Maybe you can figure out what the rings mean?

Can’t wait to work on this project some more 🙂 see you soon Gina!