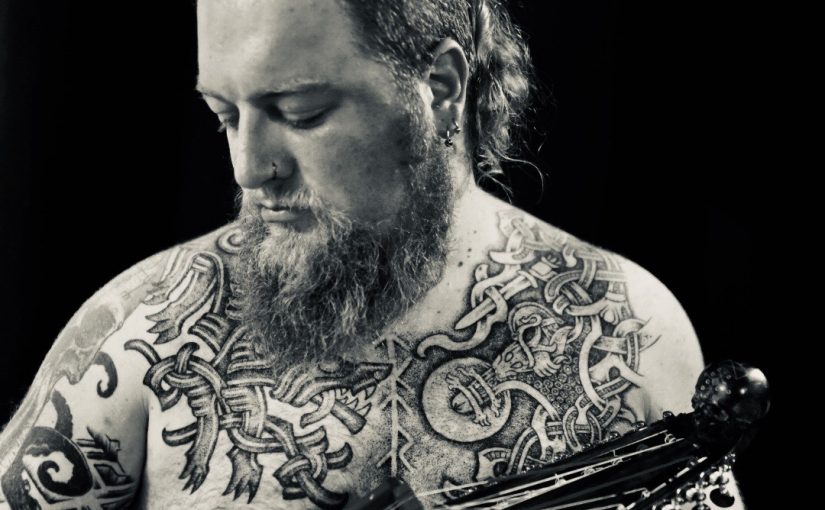 You may recognise Garm or the right side of @vik_flo_b’s chest as we tattooed the hound earlier this summer. Once again he travelled from the French Alps to have Tyr balance out his hide. It’s easy to underplay Tyr’s importance in the Norse pantheon: He is the epitome of honour and justice, even at the sake of losing his sword hand to the terrifying Fenris wolf.

He’s known as the left-handed god, although I reckon he would rather not be (not that I think it’s bad to be left-handed – like myself!). It would have been very difficult to stand in the shield wall if you trained your whole life with sword in left hand and shield in right, and especially difficult if you lacked a hand at all together. But the gods had the dwarfs on their side… kind of. They were master blacksmiths and inventors and as Tyr is a god rather than a mortal, I chose to depict him here with a specially made shield to strap onto his wolf jointed arm, not that it is mentioned at all in any stories or texts I know of.

The canine is Garm, Hel’s hound and defeater of Tyr, the Norse war god at Ragnarök. Some stories refer to Garm as a hound, others as a wolf. He is said to Guard the gates to Hel’s domain and is bloodstained. The knots around his legs symbolise his fetters breaking, as it is told happens at Ragnarök. It’s interesting how many similarities Garm has with the Fenris wolf. I wonder if they were the same beast at some point. Perhaps their stories diverged in different regions and were reunited in the tales we know today.

I had the Jelling Viking art style in mind while I drew this out. However, it’s not strictly following the artistic rules of the style in many ways. After all, Garm actually looks like a wolf-dog for a start, and not a spaghetti monster!