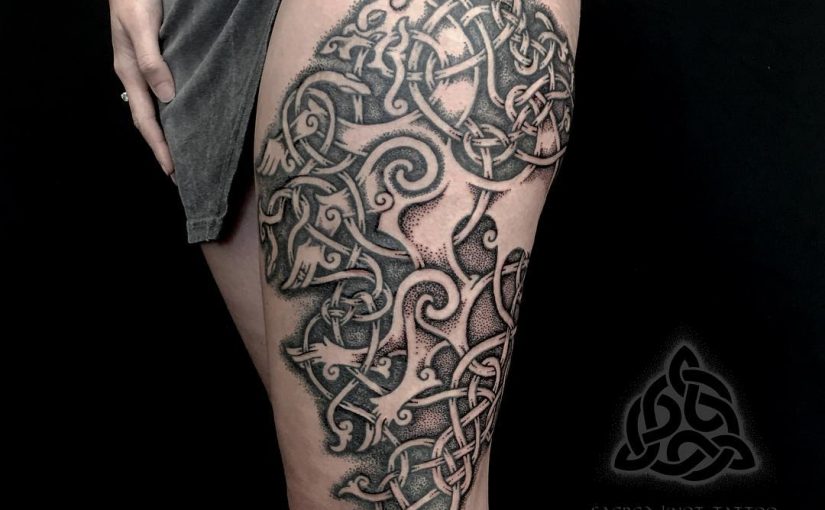 Aimée’s Urnes inspired Welsh dragon. Aimée comes from South Wales and wanted to have a tattoo to symbolise her love of our native land. She wanted to celebrate Welsh history and culture but also wanted to mix in some Nordic in with it. I chose to use this style to work with, as there was a beautiful Urnes sword hilt found in South Wales, along with the Celtic Danish knot work style that came about in the late viking age in monasteries used by monks in their manuscripts.

The welsh people of the viking age where mostly Christian and would have at best disliked the Vikings. However, it is known that they did join forces at times to attack the Saxons together and even granted some land to them settle, like the Great Orme where I am from. There’s a suspected viking hall on the Orme that remains un-excavated for flora preservation. This would back up the myths passed down in the Orme family of this actually happening. The most famous Welsh folk song “sosban fach” also have it’s origins in an ancient Scandinavia folk song.

The Welsh dragons in an ancient symbol of Wales and is first mentioned 1200 years ago in the Historia Brittonum. The dragon was supposedly the battle standard of King Arthur in the early 5th century. Although it’s probably much older than this.