Sacred Knot came to life in the beginning of December 2016 and was founded by Sean Parry, a tattoo artist of 6 years experience (at the time of writing) who specialises in Celtic and Nordic knot work. The studio is located in Llandudno in North Wales, the town where Sean grew up in a beautiful location by the sea! 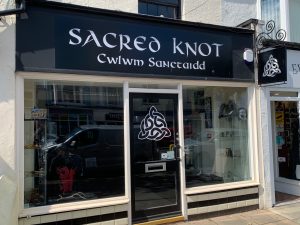 You can expect a unique experience here, as Sean has compiled a selection of artwork around the studio and our artists have an encyclopaedic knowledge of ancient arts. We all have an interest in history and especially in the cultures who have shaped Britain itself.
Historically, Britain has been a melting pot of cultures. From the early bronze/Iron Age settlements and Celtic tribes to the Roman occupation, each ancient culture left its mark on our society through their art and architecture, as well as through language. After the departure of the Romans, much of their version of civilisation fell into ruin and it was the turn of the settling of Germanic tribes (such as the Angles, Jutes and Saxons), the Vikings and later, the Normans to shape our view of British culture today.